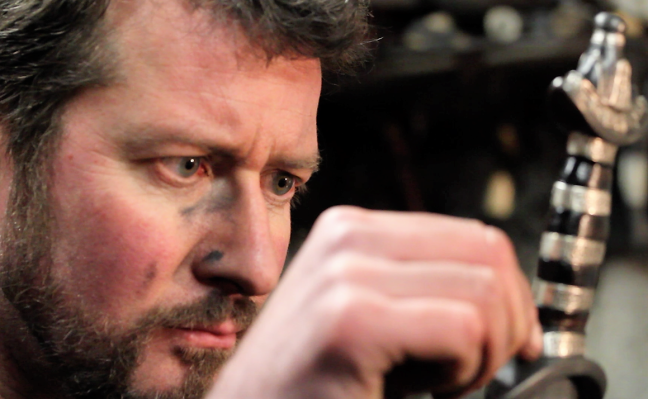 As I have mentioned before, I had been dabbling with film and TV production work on and off since university, but it was documentary film making I really wanted to do.

My friend Morven and I went on a trainee open day at BBC Scotland in Glasgow, where we quickly realised we most likely didn’t want to spend the next two to three years being floor runners for game shows and soaps – not that there is anything wrong with that, we just felt we’d done our time already. We wanted to do something for ourselves.

So a pact was made – look for local interesting stories and tell that story. I can’t emphasise enough how the story of MacDonald Armouries and the search for an apprentice literally dropped into my lap the following day, when my Grandma Dunbar tossed me the Edinburgh Evening News.

There he was, Maestro Paul MacDonald, standing in front of the armouries with a magnificent sword putting out the call for a new apprentice. What was even more remarkable was his armoury was two blocks along from my flat in Edinburgh. On the same street. And I walk past it everyday.

It became evident from our first meeting with Paul, that the short one off episode about looking for an apprentice we had envisaged was not going to suffice. We wanted more.

Paul mentioned another person had also been in touch and it sounded like he was wanting to do something along the same lines as us. He passed us his email and said maybe we should contact him. To be honest we weren’t really interested in working with someone else, but I’m so glad we sent that email.

Matt was ‘the other person’. We met for coffee and we talked about our experience and what we want to do. Again, the pieces were falling into place and we could see we would make a great production team. I now count Matt as one of my good friends and having spent a lot of time together over the last four years I couldn’t imagine this project without him.

Matt not only brought his expertise, enthusiasm and drive, he also brought another team member, Matt the sound guy. Matt 2, or as we affectionately dubbed him ‘Matt the Elder’, was a friend from Edinburgh University, and he also had an infectious enthusiasm that really spurred us on. So with two Scottish gals and two American guys, we had our team.

From that moment we were in production, which was no mean feat as at that time we didn’t have any equipment. We begged, stole and borrowed – having two Edinburgh University music department students on the team was very handy indeed. I found a camera man, Murray, who had his own equipment and temporarily joined our team until he started a new job. Murray was a great addition to our crew and we are eternally grateful for his generosity. Eventually I was able to purchase my own camera and recording equipment.

The key for us was telling the story and capturing as much as we could. Whatever equipment we had at our disposal we made do with until we could get something better. Of course I look at early footage and wish we had better quality cameras, but if we waited around for that then we would have missed a lot of interesting stories.

We were also learning on the job, getting used to filming and recording sound in strange surroundings and interviewing at the same time. Occasionally mistakes were made and that hindered post-production. But we’ve learnt a lot through the whole process. And let’s face it, we had no choice, MacDonald Armouries doesn’t let the dust settle for long.

Flash forward four years and here we are. In that time our team grew and then split to far off places – Glasgow, California and, very soon, New York City. Our team members have had weddings and welcomed two babies into the world and now a third on the way. Matt got his PhD. Matt the Elder only narrowly escaped the California forest fires. We’re all still crying over Brexit! This all at the same time as going on some of the greatest adventures around beautiful Scotland and meeting some fantastic people.

I will write a little bit about each episode as it comes out, as there are some great behind the scenes stories. Until then enjoy our first episode!

This site uses Akismet to reduce spam. Learn how your comment data is processed.